I’m very thankful that my parents decided to send me to public school instead of to a Christian school. It was a place where I could live my faith daily. I didn’t realize how great a privilege this was until I went to a conservative Christian college. There we were perpetually reminded to be a testimony to those who surrounded us.

Which is great, except that there the ways to be a witness were strictly prescribed with specific and detailed do’s and don’ts. I couldn’t find the abundant life that Christ promises his followers with the suffocating weight of guilt caused by never being able to live up to the standards that supposedly would reflect Christ and His love to others. Although rarely explicitly stated, what was communicated was that God’s love was conditional upon our ability avoid what was prohibited while willingly engaging in what was proscribed.

Today I came across Emily Freeman‘s blog post « One Thing Your Daughter Doesn’t Need You to Say, » that reminded me that Christ’s « yoke is easy, the burden is light. » Grace removes the burden of performing and allows us to make mistakes. God’s forgiveness covers all sins. And His forgiveness testifies to His love. 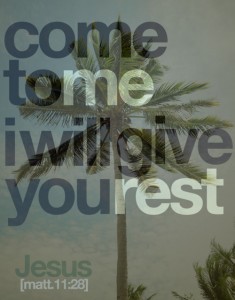 Here is portions from her blog post in the context of a radio interview in which a high school junior called in:

« After two minutes of listening to her story, it was obvious she was a good girl – dedicated student, obedient daughter, sweet disposition, high anxiety, unrealistic expectations of herself. Her main concern was being a Christian in high school and wanting to be a good example for her friends.

But it was hard, she said, to always be a consistent one.

Lucky for me, this particular radio host was deeply invested in the conversation and responded to her in an appropriate way – he told her the worst thing she could do is to try to have it all together in front of her friends.

Instead of trying so hard to be an example, just be honest. “If you struggle,” he said, “say so. If you hurt someone, apologize. Then they really will get to know you and they won’t have reason to call you a hypocrite.”

The more I think about it, the more I believe this well-meaning statement is not only a manipulative way to try to control our daughters’ behavior, but can also be dangerous to their spiritual health. When we tell her to be an example, we may as well just hand her a mask right there – Here. Hide behind this. Don’t let them see you struggle.

I know that’s not what we mean. I know. But it doesn’t matter so much what we mean, it matters what she hears.

And when she hears adults tell her to be an example, she thinks that means she can never mess up, can never have problems, can never just be a teenager with struggles like everyone else. »

Many Christian are so afraid to make a mistake, to « fall, » that they are afraid to step out in faith. This response to the Christian life reminds me of Francis Chan‘s object lesson:

Stop clasping the easy path and step out in faith. Depending always on grace.